Fashions of London and Paris, June 1805 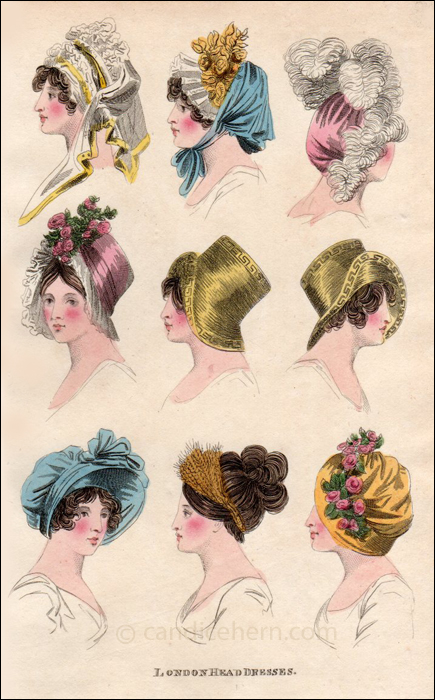 This print shows a wide variety of styles for all sorts of occasions. Figures 1, 3, and 8 are for evening wear, the rest for day wear. It is especially interesting to see a hairdo included with “Head Dresses,” though the wheat wreath could, I suppose, be considered a bandeau, which could be categorized as a head dress.

“Fig. 1.–Cap of lace and crape, bound and trimmed with primrose colours.

“Fig. 2.–Cap of white lace, tied under the chin with a blue silk handkerchief, and ornamented with a yellow flower.

“Fig. 4.– Cap of pink crape, with a deep white lace round the front, and ornamented with a flower.

“Fig. 8.–The hair dressed in the most fashionable manner, with a wheat wreath.

In the General Observations, after the print descriptions, this observation on hats is included: “Straw hats are universally worn, chiefly of the shape represented in Fig. 5 & 6.”