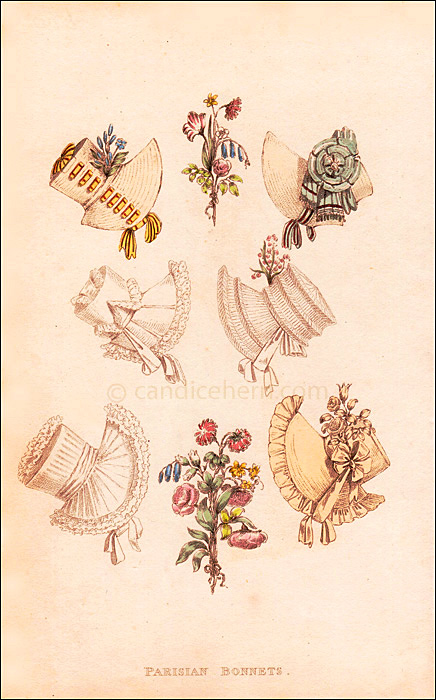 By 1817, bonnet brims had become very large, and would continue to grow over the next few years. Trimming of the edge of the brim, as seen in four of the bonnets show here, also came into to popularity at this time. The crowns had come down a bit, were now typically straight-sided, and were often adorned with large confections of ribbons and flowers.

“THE MOST FASHIONABLE PARISIAN BONNETS.
“No. 1. White straw bonnet, round crown, a moderate height; the brim is very deep. The trimming is plaid ribbon, of which there is a large knot on the summit of the crown, and a bunch of fancy flowers placed on one side.

“No. 2. A capote of cambric muslin, of a similar shape to the one just described; it is trimmed very elegantly with rich worked muslin. The brim is edged with two rows, set on rather full. The lower part of the crown is finished by vandykes of work, and the top is ornamented with a fullness of work before and behind. A full band of soft muslin ties it under the chin.

“No. 3. A second capote of perkale, which is laid on in plaits. The crown very low. The brim a moderate breadth, but very wide. Both brim and crown are trimmed with a double row of pointed work. White sarsnet strings, fastened inside the bonnet, tie it under the chin.

“No. 4. White straw bonnet, trimmed with a scarf of dark green silk, with a stripe of coquelicot in the border. This scarf is disposed is a very full rosette, and finished by long ends. A green and coquelicot striped ribbon ties this bonnet, the form of which resembles the one we fist described, under the chin.

“No. 5. A capote composed of striped muslin. The crown is oval and low; the front is deep, and comes down square at the sides. At the back of the crown is a piece of the same materials set in very full, which quite shades the back of the neck; it is tied with soft white ribbon, and ornamented with a bunch of wild flowers. 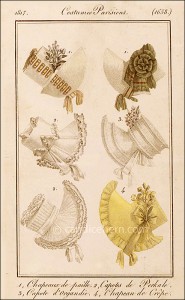 “No. 6. A bonnet, composed of yellow crape, the crown of which is very low, and the front enormously large: it is trimmed round the brim with a fulness of yellow crape, ornamented with a bunch of yellow crape roses and a very large knot of yellow ribbons: it ties under the chin with ribbon to correspond.

“The small bunch of flowers consists of tulips, pinks, narcissus, and roses, The large bunch is composed of roses, narcissus, blue-bells, and poppies, all of which are at present in high estimation among Parisian elegantes.”

This print was copied from a print in the Paris edition of Journal des Dames et des Modes, June 30, 1817, shown here. Ackermann’s has added the sprigs of flows in the middle, otherwise, the bonnets are almost identical. Click on the image to see a larger version.