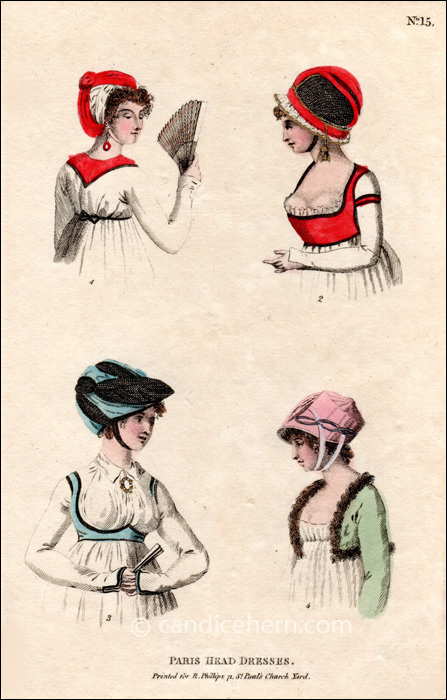 Generally, when half-length figures are shown in the prints from this magazine, a garment that is shown in full is described. But here, they followed the lead of the French magazine, which only described the hats and not any of the upper-body garments shown.

The gold trimming and the pendant earring in Figure 2, and the necklace in Figure 3 are painted in bright gold metallic paint. Difficult to see online, but very bright in person.

“Fig. 1.–Turban en ruche. This head dress, which takes its name from a beehive, has been made up of deep red gauze, upon a white ground; as also another in black gauze. Like other turbans, it admits of a feather.

“Fig. 2.–Velvet Toque, (cap) trimmed with lace, worked in gold.–This is an imitation of the costume of a Venetian actress. Among the élégantes who brought it out, it is always worn with the Swiss, or half corset, of which the most common are white satin, trimmed with deep red velvet.

“Fig. 3.–Minerva Helmet.–The border should be round, and very irregular.–The blue colour in head dresses has had, in Paris, but transient success. The chamois has not generally taken, the deep red is again coming into wear.

“Fig. 4.–Minerva Hat.–Chamois is still the fashion; the rose-colour is again resumed, and the effect of green and sky blue are tried by a few ladies who have considerable influence on the ton.”