Fashions of London and Paris, November 1808. 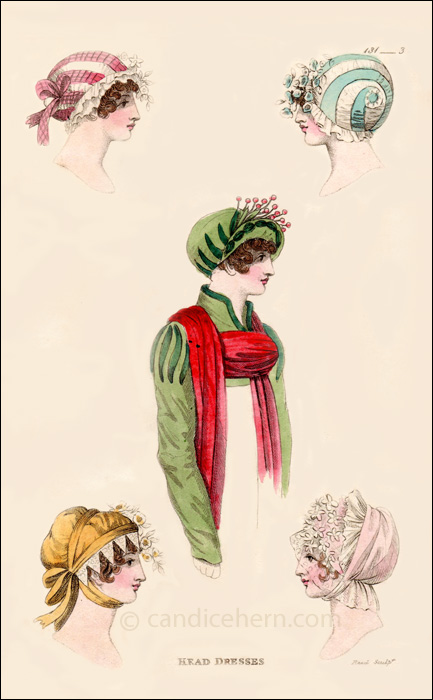 Starting sometime in 1806, the prints of hats in this magazine (which began publication in 1798) now included a larger central figure, called a half-length, that showed, and described, the top portion of an ensemble.

Note that only the hat on the central figure is actually called a hat. That is because it has a brim. All four other head-dresses are called caps, as they are made entirely of fabric and have no brim.

“No. 1.–A cap of plaid riband and white satin, with a narrow lace border, ornamented with bows of riband and a flower.

“No. 3.–A Spanish spencer of shot sarsnet, with a hat to correspond. A scarf shawl, crossed behind.

“No. 4.–A cap of coloured satin, with a border of vandyked lace; a flower in front.

“No. 5.–A cap of pink satin, or sarsnet, with a double border of deep white lace; a flower in front, between the two borders.”