Fashions of London and Paris, September 1799. 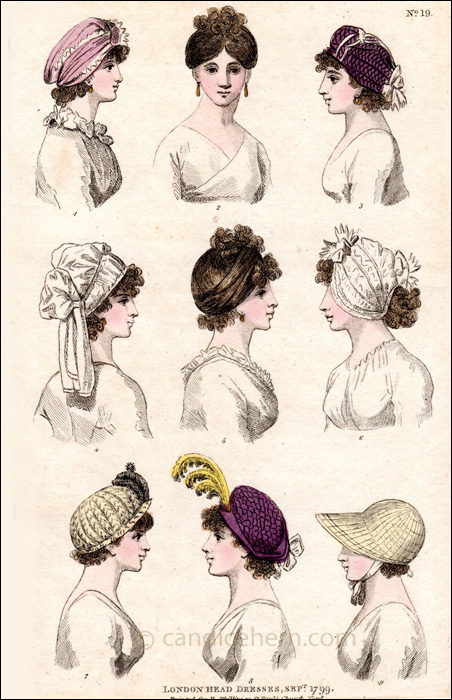 Often in prints of head dresses we are shown hairdos as well, which I always find interesting. It must have been useful for readers to learn the latest ways of styling hair.

It is intriguing that Figure 7 is called a porcupine bonnet, as those creatures were indigenous to North America and northern South America, and not at all known in England.  The closest thing they have to a porcupine is a hedgehog, and yet here we have a porcupine bonnet. Perhaps it was so called as the piped straw resembled porcupine quills. A interesting bonnet name, in any case.

“Fig. 2 The hair combed with bows in front and large curls at top, the neck and ears quite bare.

“Fig. 4. Turban of white muslin, the front is a reverse plaited band, the crown full and finished on one side with a bow and end.

“Fig. 5. The hair banded; short in the neck; low and full on the forehead; a full tuft at top behind the bands.

“Fig. 6. A fashionable and elegant morning cap made of white muslin; three full lace borders, bows of white ribband behind and before.

“Fig. 7. The porcupine bonnet made of pipe straw, raised alternately. A raised ostrich plume in front, and a military plume close to it on the left side.

“Fig. 8. A puckered sattin bonnet with a shaded coque plume. MAde in all colors.

“Fig. 9. The new Grecian shape made of pipe straw and gimp.”