Fashions of London and Paris, September 1804. 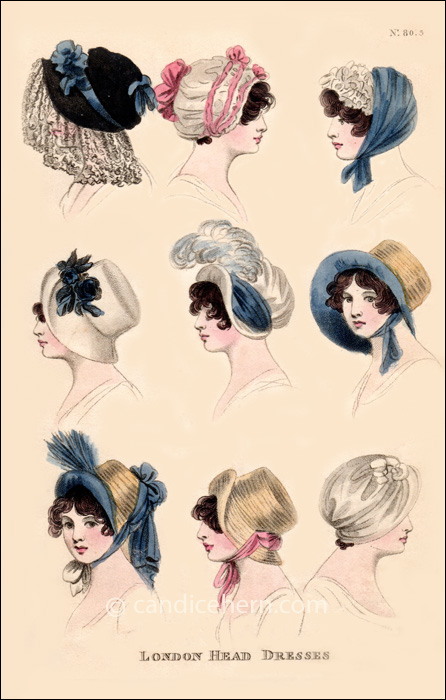 In the General Observations in this issue of the magazine, purple is noted as one of the most fashionable colors for the month.  Several of these hats incorporate purple, according to the descriptions, although in this print, at least, those purple elements are painted blue.

The hat in the center row right is called a Conversation hat. A Conversation hat was a poke bonnet with one side of the brim projecting beyond the cheek, the other side turned back from the cheek, possibly to make it easier to have a close, private conversation without the obstruction of the brim. The hat in the center of the bottom row is called an Obi hat. An Obi hat was made of straw or chip with a high crown and a narrow brim rolled back in the front. It is named after a character in a pantomime popular at the time.

“No. 1.–A bonnet of black silk, trimmed with purple; short black lace veil.

“No. 2–A cap of white muslin, ornamented with pink bows.

“No. 3.–A morning cap of white lace, with a purple Barcelona handkerchief pinned over the back part, and tied under the chin.

“No. 4.–A white beaver hat, turned up in front, and ornamented with a flower.

“No. 5.–A dress hat of white silk, trimmed with purple; a purple an white ostrich feather in front.

“No. 6.–A conversation hat of straw, lined and tied under the chin with purple.

“No. 7.–A small straw hat, trimmed with purple; feather of the same colour in front.

“No. 8.–An Obi hat, tied under the chin with pink ribband.

“No. 9.–A small bonnet of white satin, turned up on one side, and ornamented with a white flower.”