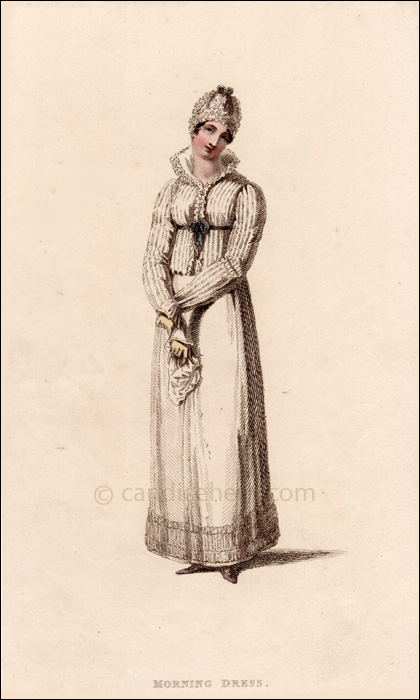 As the model is wearing a cap, this is meant to be an indoor morning dress, ie one primarily worn at home. Most indoor morning dresses were of white. But the gloves and half-boots, and even the spencer, suggest that it could be adapted for outdoor wear, simply by adding a bonnet over the lace cap.

Some historians have suggested that among Ackermann’s team of colorists, he employed specialists to paint faces. This beautiful face, as well as many others from this magazine, does indeed look as though it might have been painted by someone with an especially delicate hand.

“A petticoat of fine jaconet muslin, ornamented at the feet with a flounce laid on, appliqued with borders of needle-work. French spencer, of striped muslin; long loose sleeve confined at the wrist with a bracelet; high military collar–collar and fronts trimmed with lace; short sash of lilac sarsnet tied in front. A melon cap, composed of lace and lilac ribbon, confined in bows upon the crown. Half-boots or sandals, lilac kid. Gloves, Limerick or French kid.

“For the fashions for this month [including this print] we are again indebted to the tasteful and elegant designs of Mrs. Bean, of Albemarle-street.”