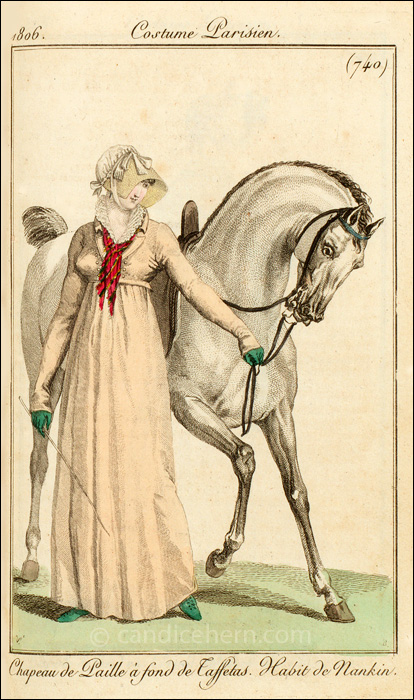 Though this is clearly a riding habit, it almost looks more like a walking ensemble. There doesn’t seem to be the usual train, which would drape over the legs when riding side saddle, though it could be unseen in the back. The straw bonnet, however, is extremely unusual for riding, especially with its wide brim, limiting peripheral vision.

The habit is made of nankin, a yellow or buff-colored firm-textured cotton. Though most habits are made of wool, this print is from July, and the lighter cotton fabric would have been appropriate for warmer weather. The open collar of the habit shirt is also unusual, but appropriate for summer riding. The bright scarf is a charming touch.

The green gloves are very French. One seldom sees such bright colored gloves in British prints. Here, they match the bright green laced shoes, which may be half-boots. The long sleeves on the habit jacket, reaching to the knuckles, is also a French affectation, primarily seen in men’s jackets. At this time, male tailors also made riding habits for women, so elements of male fashion often turn up in ladies’ riding habits.

The print was designed by the popular Parisian artist Carle Vernet.