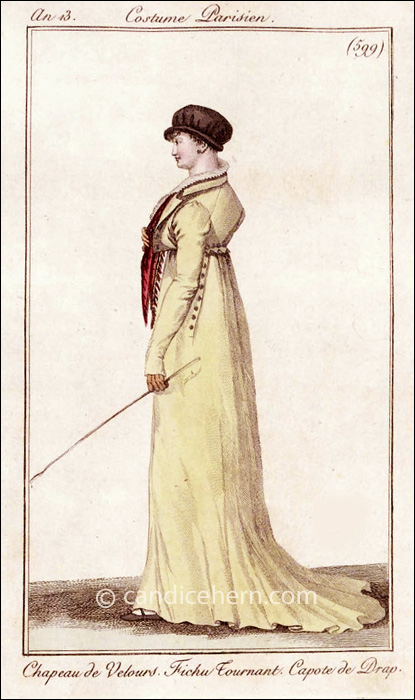 The styling is simple, and somewhat masculine. The jacket has lapels and a standing collar, and appears to be single-breasted. It has the tiniest peplum in the back, a standard element of a lady’s habit which, only a few years earlier had been much longer.

Under the jacket, we can see a habit shirt with a scalloped or vandyked collar. As with many French habit shirts, it is open at the neck, unlike the high collars typically seen in English habit shirts. The red scarf tied around the collar provides a nice pop of color.

The habit skirt shows long pocket slits, decorated with buttons. Pocket slits in habit skirts were not uncommon, as old-fashioned pockets were often worn under the habit (as riding made carrying a reticule difficult). The skirt is full and gathered at the back, with a train. Black slippers can be seen beneath the skirt, where one might expect to see half-boots.

The hat is a black velvet jockey cap.