During the 17th and 18th centuries, fashionable men and women adorned their faces with artificial beauty marks made of black silk taffeta or velvet. The English called them patches. The contrast of the black patch against pale skin was thought to make the skin look beautiful and to draw attention to certain parts of the face, eg the eyes or the mouth. The placement of a patch could also have a specific meaning. For example, a patch at the corner of the lip signaled flirtatiousness. Most patches were simple round dots, but some were cut into intricate shapes of small crescent moons, diamonds, or stars.

A new type of box was created specifically to hold patches. About the size of vinaigrettes, patch boxes were made of all sorts of materials, the most popular being sterling, enamel, and porcelain. Typically oval or square in shape, they had a hinged lid, often with a mirror on the inside of the lid. Examples include this simple sterling patch box from the Metropolitan Museum of Art, and this fanciful porcelain patch box from the V&A.

Just as vinaigrettes made their way into other objects, eg rings, quizzing glasses, and scent bottles, so did patch boxes. The scent bottle from my collection shown here includes a patch box. (Click on images to see larger versions.) 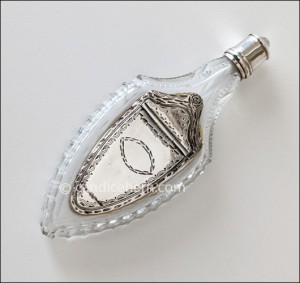 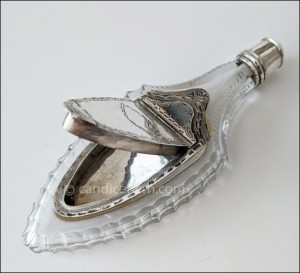 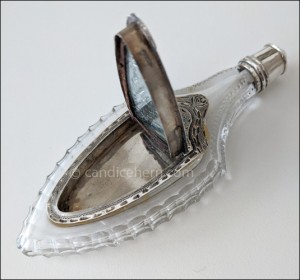 This shield-shaped scent bottle is made of clear faceted cut class, is English, and dates to c1780. The center is inset with a sterling engraved patch box. The hinge opens to reveal its internal compartment and mirror. The bottle’s screw-on lid is also sterling.  This type of scent bottle is known as a lay-down bottle, as they were not made to stand upright on a dressing table. Instead, they would lie flat on a surface.  It could also be tucked in a pocket where its double purpose would be practical. This scent bottle measures 4 ½” long.

This article is featured in: Regency Collections ~ Within Collections: Dressing Table Items