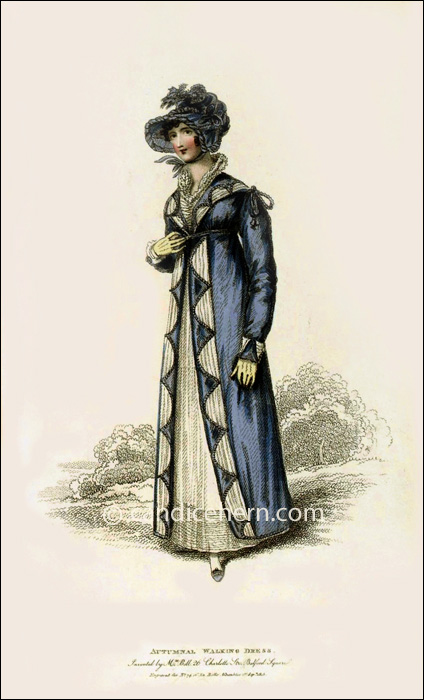 Here, the pelisse is the star, with no mention at all of the dress worn under it. It is described as violet, but all versions of this print I have seen show it as blue.

An interesting part of the description below is how to adapt this pelisse for a carriage costume. Interesting, because the carriage version sounds much more dressy than the walking version. One would think a carriage costume (which I have always assumed would be worn for a long carriage journey) would opt more for comfort than elegance.

“Pelisse of French violet silk, or rich twilled violet sarsnet; it is made in the French style, open in front, very short in the waist, and the back drawn in behind with an easy fullness. Long loose plain sleeve, ornamented on each should with a bow and long ends. This pelisse is trimmed in a style of great elegance and originality with byas white satin laid on in folds, and points of sarsnet, to correspond with the pelisse, are turned over; the effect is strikingly beautiful. Bonnet to correspond, ornamented with artificial flowers, and tied under the chin with ribband of a similar colour. For the form and trimming of this bonnet we refer our readers to the Print, which will give them a correct idea of its exquisitely modest, simple, and gentlewomanly effect. Slippers to correspond, and white kid gloves.

“We have to observe that this pelisse, made in white sarsnet and ornamented with white satin, is also the first style of carriage costume; when worn in the latter, the head dress must be either a half-dress cap, or a white satin small gipsy, or Wellington hat; if either of the two first the ornaments are flowers, and feathers if the last.

“The above dresses were invented by Mrs. Bell, Inventress of the Ladies Chapeaux Bras and the Circassian Corsets, and of whom only they made be had, at her Magazin de Modes, No. 26, Charlotte-street, Bedford-square.”