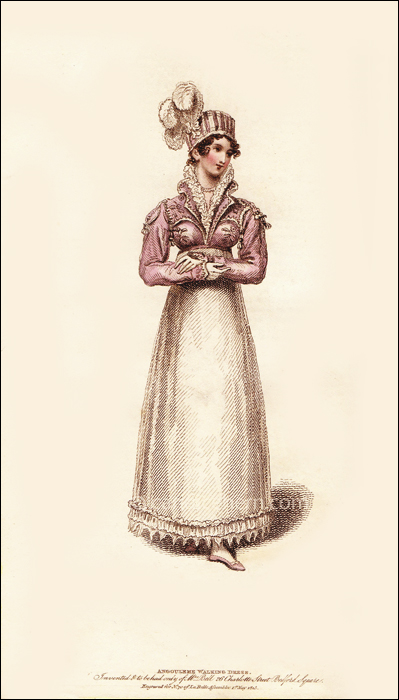 “Angouleme Walking Dress. Invented & to be had only of Mrs. Bell, 26 Charlotte Street Bedford Square.”

The Duchesse d’Angoulême, the daughter and only surviving child of Louis XVI and Marie Antoinette, was an object of fascination and huge popularity in England after the first defeat of Napoleon in 1814 brought her family back into power in France. Even though Napoleon had returned and was again fighting the allied forces, the popularity of the Duchesse d’Angoulême had not waned. The name Angoulême or Angouleme was used repeatedly for various elements of fashion, including hats, pelisses, mantles, and, as here, spencers.

Mrs. Bell, the designer of this “Angouleme Spenser,” gave the same name to a very different spencer the previous year. (Click here to see it.)

“Half high dress of the finest cambric or jaconet muslin, made tight to the shape behind, and seamed up the back, round the arm-hole, and under the arms with narrow letting-in lace; the front is full, and is composed of two byas pieces of muslin tightened in to the shape by a letting-in lace to correspond; the waist is very short; the dress is trimmed round the bosom with a double frill of very fine lace put on as full as possible. Over this is worn the Angouleme spenser, for the form of which we refer our readers to the Print; it is made either in peach-blossom satin, or white kerseymere, the last, though late in the season, is much in estimation. The form of this spenser is perfectly original, and we do not recollect having ever seen any thing more tasteful and elegant, it is exquisitely becoming to the shape, particularly when worn with the Circassian corset; and the trimming we conceive to be the most elegant novelty that has ever been introduced; it is composed of silk, and unites in an uncommon degree two things generally considered as opposite, richness and lightness. Each side of the bosom is ornamented with a fleur de lis, and the epaulets on the sleeves and the ends of the fronts, are finished with tassels. The head-dress worn with this elegant spenser is strikingly novel and tasteful; it is composed of peach-blossom, moss silk, and white satin, an ornamented with a superb plume of feathers. Ladies who are partial to the head-dresses of this description will find the Angouleme cap description worthy of their notice, and we are sure will coincide with us in opinion that it is not only remarkably elegant, but, generally speaking, exquisitely becoming.”

After the description of the second print, the following attribution is provided:

“The above dresses were invented by Mrs. Bell, Inventress of the Ladies Chapeau Bras and the Circassian corsets, and of whom only they can be had, at her Magazin des Modes, No. 26, Charlotte-street, Bedford-square.”